The Democrats’ debt to the people of New Orleans 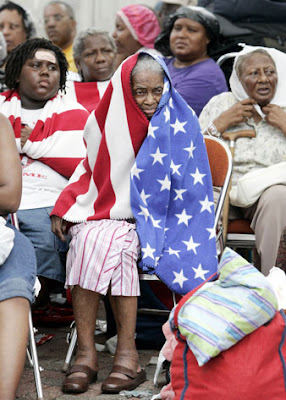 Melissa Harris-Lacewell and James Perry co-authored this piece for The Nation. Here’s an excerpt:

When New Orleans flooded in August 2005, the Democratic Party was a shambles, locked out of the White House, the Senate and the House of Representatives. For nearly a decade the Democrats played defense against a Republican onslaught initiated by Newt Gingrich’s Contract With America. After September 11, Democrats had joined with Republicans in giving President Bush unprecedented executive authority, thereby helping to erode civil liberties at home and authorize ill-advised aggression overseas. In 2004 Democrats were keenly aware that a solid majority of Americans believed it was unpatriotic to protest the Iraq War. So instead of articulating a clear alternative to Bush’s militarism, they nominated John Kerry on the strength of his record as a solider. Even so, they found it impossible to outmaneuver the existing commander in chief.

In August 2005 the Democratic Party had no clear leader, no identifiable platform, no winning national coalition and little political courage.

Then the force of Hurricane Katrina devastated the inadequate levees surrounding New Orleans. Americans watched as the city flooded, the power went out, and food and water became scarce. They watched as emergency shelters became centers of disease, starvation, agony and death. The nation watched in horror, but no mass evacuation began and Air Force One did not land. As the crisis wore on, the public became increasingly confused by and angry about the lack of coordinated response to alleviate human suffering and evacuate trapped citizens. As the waters rose, President Bush’s approval sank.

Read the rest of the article.

This site uses Akismet to reduce spam. Learn how your comment data is processed.